ŠKODA has demonstrated the possibilities of pure-electric travel on land and in the air by pitting the new ENYAQ iV against the world’s first all-electric passenger plane, revealing how zero-emission travel of all types could soon be a reality.

Positioned at the cutting-edge of electric aviation, there are currently only two airworthy examples of the Pipistrel Velis Electro in the UK. Soon, though, it is hoped that hundreds of the aircraft will change the face of sustainable flight. To give an indication of the progress of electrified transport and demonstrate just how far EV technology has come, the ENYAQ iV and electric plane were put head-to-head in a twin test with a difference.

With a range of up to 331 miles thanks to its 82kWh battery and highly aerodynamic design, the five-seat ENYAQ iV leaves range anxiety in its wake. In comparison, the Velis Electro’s 21kWh energy supply provides just 45 minutes of flight time - around 125 miles at cruise. Unrestricted by the speed limits under which the ENYAQ iV’s 150kW motor must operate, however, the plane’s 60kW powerplant can propel two passengers up to a top speed of 112mph.

One area in which both vehicles excel versus their conventional alternatives is economy. An hour of flight time in the Pipistrel costs as little as £2.00, compared to the £70-80 fuel bill which a combustion aircraft would incur. The ENYAQ iV is similarly frugal, with a 100-mile journey requiring just £4.14 in electricity, compared to the £27 of petrol used by an equivalent SUV. This results in running costs of just 4p per mile for the ENYAQ iV and 2p per mile for the aircraft.

Such cost savings are just one benefit of the transport industry’s drive to decarbonise. Along with emitting zero local-emissions, both the electric car and plane are significantly quieter and smoother than their ICE counterparts, while also requiring less maintenance.​​ 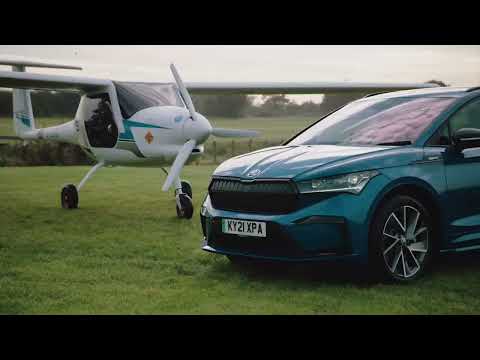 The reduction in decibels will impact those far beyond the occupants of the vehicles themselves. According to the World Health Organisation, noise is the second most harmful environmental factor after air pollution, with the leading contributor to noise pollution in the UK being traffic. Data shows that EVs can reduce noise pollution by over 50% compared to ICE-powered machines and, while the Pipistrel is slightly louder (around 60 decibels vs the ENYAQ iV’s 40) it too represents a halving of noise emissions compared to a traditionally powered aircraft.

The aircraft industry remains some way behind the automotive sector bigger when it comes to electrification. Fully electric short-haul planes with capacity for up to 200 passengers are not predicted to be commercially viable for at least another 10-20 years. Nonetheless, with around 19,500 light aircraft registered in the UK, and roughly 82% of the UK's population living within 35 miles of a Category 2 airfield, the Pipistrel offers an exciting insight into the near-term benefits that electrification can soon bring to the light aircraft industry.

With over 345,000 EVs already on UK roads, and EV car sales increasing by 186% in 2020, the ENYAQ iV demonstrates the real-world readiness of electric cars for consumers looking to take the step into greener and cheaper travel today.

The Origins of ŠKODA | Where is ŠKODA From?

How to Change the Battery in a Ford Key Fob

Where Are Kia Cars Made?

As credit broker and not a lender we will provide you with comparable details of firms most appropriate to your lending requirements based on our panel of lenders who may pay us for introducing you to them. We will make a credit recommendation after assessing your requirements.

As an Insurance Intermediary (Broker) acting on behalf of customers and not an Insurer, we do not offer insurance through this website. Please contact us directly if you wish to discuss insurance.