Ford is introducing a “Smart Mirror” - a high-definition screen that displays a panoramic rear view for the driver of Transit and Transit Custom vans.

The Full Display Interior Mirror helps drivers to spot cyclists, pedestrians and other vehicles that may be behind them, even when windowless rear doors or partitions are in the way.

The display shows a live feed from a camera on the rear of the van and features automatic brightness control for optimum visibility in daylight and at night. The system offers a field of view that is twice the width of a conventional rear-view mirror. This helps drivers to be more aware of their surroundings, for example, when approaching roundabouts, changing lanes or checking before merging or turning into side streets.

“Providing our drivers with maximum visibility – especially in urban areas where there is so much to look out for – increases their confidence and is a key part of making journeys safer for them, and for other road users as well”, said Owen Gregory, director, Commercial Vehicle Aftersales, Ford of Europe.

Ford’s new mirror could be particularly beneficial for delivery drivers making frequent drop-offs in cities, where they are more likely to encounter those on bikes, e-scooters or on foot; vulnerable road users accounted for 70 per cent of road accident fatalities in Europe’s urban areas in 2019. 1 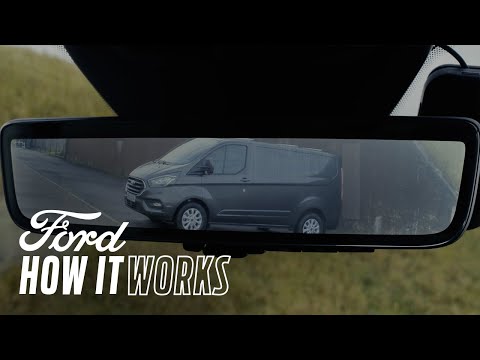 No job too big! The Transit 5-Tonne.

A Day in The Life of a PHEV