Previously seen only in prototype form at the 2021 Goodwood Festival of Speed, the M-Sport Ford Puma Rally1 marked Ford’s first foray into electrified motorsport globally with its competitive debut at the FIA World Rally Championship (WRC) season-opening Monte Carlo Rally last weekend, successfully taking the win on the first round and heading to Sweden in February for the second round.

The car was driven and stunts performed by M-Sport Ford WRT driver Adrien Fourmaux using ramps and rigs developed by Ford engineers based at the facility. Ford colleagues also used their expertise to bring assembly robots to life for the film and every actor featured is a Ford employee from the plant. 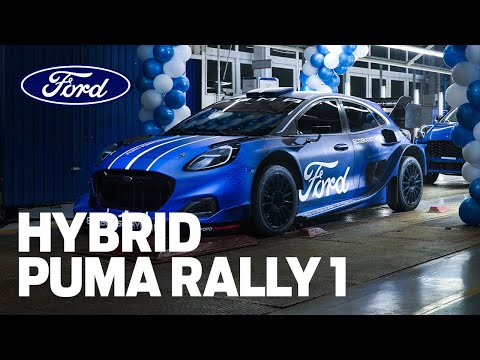 The new M‑Sport Ford Puma Rally1 car follows in the footsteps of the Ford Fiesta WRC car, which secured three WRC titles following its introduction in 2017.

Ford's first electrified competition car introduces a next-generation hybrid powertrain that captures energy during braking and coasting and stores it in a 3.9kWh battery, before using it to supplement the championship-winning performance of the turbocharged 1.6-litre EcoBoost petrol engine with repeated boosts of up to three seconds from a 100kW electric motor.

The M‑Sport Ford Puma Rally1 can also use its electrified powertrain to travel through towns, cities, service parks and chosen sections between stages using pure-electric power. The battery pack can be recharged using an external power source at the dedicated service points between stages, with a recharge taking approximately 25 minutes. Weighing 95kg, the hybrid system is liquid- and air‑cooled and housed in a ballistic-strength casing to resist the impact of debris and g-forces in the event of an accident.

The road-going Ford Puma uses a 1.0-litre EcoBoost Hybrid powertrain 2 with 48-volt mild hybrid technology to boost fuel efficiency and driving fun. A belt-driven integrated starter/generator recovers energy to charge a 48‑volt lithium-ion battery pack, and also acts as a motor, integrating with the engine to provide torque assistance that can help save fuel or enhance performance, depending on the driving scenario.

Ford is going all-in on electrification, and earlier this year announced that 100 percent of its passenger vehicle range in Europe will be zero-emissions capable, all-electric or plug-in hybrid by mid-2026; moving to all-electric by 2030.

In addition to unveiling the competition Puma Rally1 car, Ford also revealed that the 1 millionth vehicle manufactured at its Craiova assembly facility is a Puma ST-Line in Desert Island Blue, powered by a 155PS EcoBoost Hybrid engine.

The Origins of ŠKODA | Where is ŠKODA From?

How to Change the Battery in a Ford Key Fob

Where Are Kia Cars Made?

As credit broker and not a lender we will provide you with comparable details of firms most appropriate to your lending requirements based on our panel of lenders who may pay us for introducing you to them. We will make a credit recommendation after assessing your requirements.

As an Insurance Intermediary (Broker) acting on behalf of customers and not an Insurer, we do not offer insurance through this website. Please contact us directly if you wish to discuss insurance.